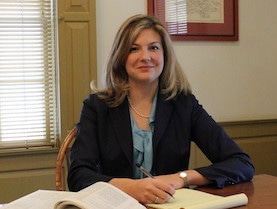 Kaity was born and raised in the Lakes Region, attending Inter-lakes High School in Meredith where she was an active student and athlete. She attended Connecticut College in New London, Connecticut, graduating Cum Laude, with Honors in History after completing an Honors Thesis on Italian Unification in May of 2008. While in College, she was a Scholar in the Center for International Studies, spending a semester and summer abroad in Italy. She received her Juris Doctor from Rutgers School of Law – Newark in New Jersey in May of 2014. In her final year of law school, Kaity served as the Managing Editor of the Women’s Rights Law Reporter and her note, The 2012 Battle for the Reauthorization of the Violence Against Women Act: Lessons Learned and Questions Left Unanswered, was selected for publication for the Winter 2014 edition of the Journal.

Prior to law school, Kaity spent three years as a paralegal in the Litigation Department of a large corporate law firm in New York, where she received practical experience in the different phases of Litigation. She is proud to join Normandin, Cheney and O’Neil, where a member from every generation of her family has practiced law since 1914, including her father, Jerry O’Neil, Jr.

An avid hiker and skier, she is excited to return to hiking and skiing in the Lakes Region and White Mountains, and enjoys spending time boating and water-skiing on Lake Winnipesaukee in the summer.